India remains heavily dependent on coal for power generation. Of India’s total installed capacity of 374 GW, 53 percent (200 GW) was fired by coal at the end of 2020. In terms of actual power generation, the figure is actually higher since renewables provide intermittent capacity over the course of the year. State-owned enterprise Coal India is the largest coal mining company in the world.  Most power plants have only 3-4 days’ worth of coal on average. This is significantly less than the government’s recommendation of at least two weeks’ worth of supplies.

The coal scarcity is particularly severe in non-pithead plants, or plants that are located distance from coal mines. 98 of the 108 plants that have reached critical stock levels, or less than 8 days, are of this type.

The current coal crisis has served as a wake-up call for India, and it is now time to lessen its over-reliance on coal and adopt a more aggressive renewable energy plan and focus on wind, solar, ocean energy etc.

How is a day in an UPSC aspirant's life? 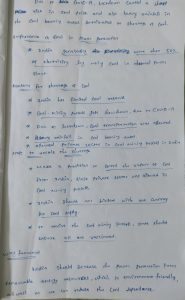 Compress your picture below 2MB, then you can post it