The Laws of Human Nature

All of us are complicated people with individual thoughts and flaws but some experiences are universal. With an enhanced understanding of our nature, we will be able to live out our best life.

From time immemorial, there has been a conflict between our rational and emotional sides. A pioneer for rational behavior was Pericles, a statesman in Athens who lived near the 5th century B.C. He prevented unnecessary war by simply employing patience. When a problem arose, he’d just think it over with every possible outcome and angle. Take a leaf out of his book so you’re not deciding things because it was a spur of the moment. Ponder on the biases we all have while making a decision:

The result of our biases is bad judgments and it is wiser to be logical and curious about differing perceptions. You must strike a balance between your emotional and logical side.

Human beings are narcissistic by our very nature. This can be a healthy amount of narcissism as opposed to deep narcissism. Deep Narcissists are those with a defective sense of self and view other people only as an extension of them. This can develop during the period in childhood where recognition of individuality occurs. Deep narcissism can occur due to one of two reasons:

As a result, they find coping mechanisms to piece themselves together, which include jealousy, attention-seeking/controlling ways, and an inability to handle criticism. These kinds of people lack:

STRIVE TO BE SUPERIOR

All of us are a combination of strong and weak qualities which we acquire either because of nature or nurture. Our intrinsic traits do not have to manipulate us. On the contrary, we can control them including the weak ones. The first step is to admit you have a flaw. Recognize it for what it is and put yourself in a situation that doesn’t aggravate it. For example, if you are a perfectionist, then avoid situations where you won’t have the desired level of control.

All of us are envious of something or someone. We are hardwired from an evolutionary standpoint to be competitive. It had always been survival of the fittest. We deny that we are jealous because it is also an admission of inferiority.

FARSIGHTEDNESS AND SELF SABOTAGE

You are more likely to respond to something current and in your short line of vision. ‘Immediate and more pressing problems’ are given more attention, than say global-warming. We tend to ignore the bigger picture as our survival used to depend on worrying about the little things. But far-sightedness is the better policy to adopt. 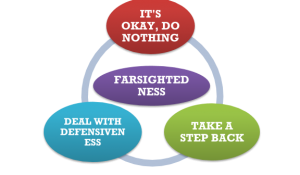 Self-sabotage is facilitated by a negative attitude. For example, despite his dire circumstances, Anton Chekov did not give up on life nor did he lose his human feeling of empathy. He was unchained from anger when he forgave his father and negative feelings did not find a home in him. Acknowledge your negative traits to let go of them. Repressed feelings are termed as ‘Shadow Self’ and the more it is allowed to simmer beneath, the more dangerous it is. 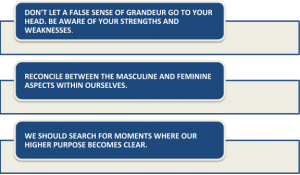 It is human nature to strive to fit into a desired group or community. We tend to regress into primeval and conservative thinking when part of a group. To avoid negative results of group or mob mentality (its consequences are littered in history), the author suggests being part of a Reality Group. This can be seen as the canon or standard of what a group should be; one that is not bothered by petty politics and power struggles but instead focuses on their true goal and teamwork. Some people also tend to have a false sense of entitlement where they don’t earn the respect they get, and also don’t mesh well in groups.

Everybody has the potential to be aggressive in certain situations. Repressing it leads to passive aggression and self-loathing as all that emotion has nowhere to go. The first step is to identify where it stems from and then channel it to more fruitful ends. Recognizing our aggression helps in understanding people better. 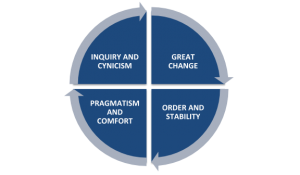 By understanding our past, we will be more attuned to the spirit of the time of the future. Knowledge of our mortality is the biggest influencer of our decisions. It is an inevitable fact of life that cannot be denied and when it is embraced, it can help us lead a rewarding life. Recognize the beauty in existence and live your best life today!