Antimicrobial Resistance (AMR) occurs when bacteria, viruses, fungi and parasites change over time and no longer respond to medicines making infections harder to treat and increasing the risk of disease spread, severe illness and death. As a result of drug resistance, antibiotics and other antimicrobial medicines become ineffective and infections become increasingly difficult or impossible to treat. WHO has declared that AMR is one of the top 10 global public health threats facing humanity.

How it affects public health and economy

Reasons for Spread of AMR

What is to be done?

AMR has the potential to send the globe back to a time before antibiotics, when even minor infections were untreatable. As a result, a One Health Approach is required to restrict AMR through coherence, integration, and multi-sectoral collaboration and activities, as human, animal, and environmental health are all intertwined. Antibiotic resistance breakers (ARBs) are being developed to restore the efficiency of older antibiotic classes. 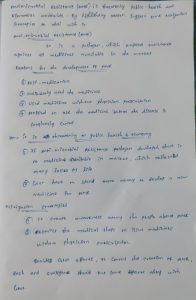 I am not able to attach multiple pages

Compress the files below 2 mb